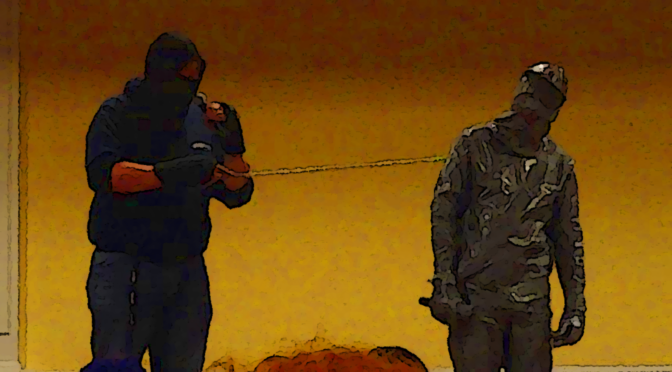 So this week we’ve talked about Duct Tape Boy and Greenboy, so it’s about time we got to another well known member of the No Brand Heroes – the Gardening Ninja. While a “vital” member of the team (at least according to him), it’s rare to see him voluntarily go out on a mission.

And when you think about it, he’s actually kind of useless.

But considering he’s also considered the current “leader” of the No Brand Heroes, it would be weird not to talk about him. So, without further ado, let’s dive into the history of the Gardening Ninja, how he joined the group, how he rose through the ranks, and how none of it made any bit of difference. 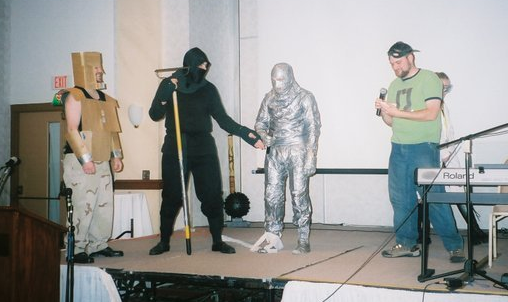 The Gardening Ninja claims to be the last remaining member of a Japanese ninja clan with a history spanning centuries, and is a practitioner of the martial art “Gardenjitsu.” The fact that he’s a 6’3″ white guy (and “Gardenjitsu” is effectively gibberish) usually casts some doubt on this. But he dresses like a ninja and carries a rake… so what else are we going to call him?

Contrary to popular belief, the Gardening Ninja was not an original member of the No Brand Heroes. While he could be spotted around No Brand Con for a few years, he didn’t formally join the team until just after the Heroes took back the convention from Executron and the evil BrandCorp in 2005.

Soon after joining, Duct Tape Boy (who was in charge at the time) declared that (the original) Greenboy and the Gardening Ninja would be the “Vice Principals” of the No Brand Heroes. Technically there’s more to that story, but it’s best chalked up as a weird phase for the team. The only real lasting effect was that Greenboy and the Gardening Ninja shared responsibility as co-second in command for the team. 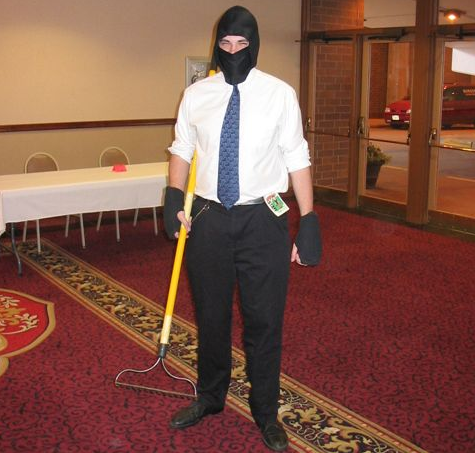 Anyway, the two decided to settle their differences with a Dance Off during the cosplay contest intermission. 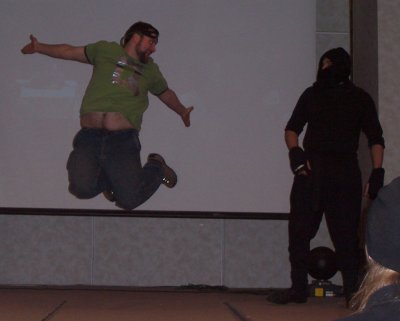 Duct Tape Boy, who was judging the contest and not participating, declared that both Greenboy and the Gardening Ninja had lost — and that he was the actual winner. At this point everyone was too tired to care.

Importantly though, it was at this point that most of the No Brand Heroes decided that the team needed more organized leadership. I mean, as leader Duct Tape Boy had been declared dead, let the con get taken over by an evil corporation, declared that everything was a high school. He wasn’t really good at the job. Greenboy and the Gardening Ninja were the obvious two replacement choices (as “Vice Principals”), and the Gardening Ninja got the job… because he asked Duct Tape Boy for it?

Apparently no one had ever thought of that before.

From this point forward, the Gardening Ninja took the role of leader pretty seriously. And by “seriously” I mean “sat in a chair and yelled a lot.” While initially he conflicted a bit with the original Greenboy, when the mantle was passed on, the second Greenboy got along fine with him. After taking over the job, he seldom left the No Brand Heroes base of operations, the Amazing Justice Center. Heck, the only time he left voluntarily was in an alternate post-apocalyptic timeline that got erased after Future Girl traveled back in time and stopped Executron from activating his M.A.C.G.U.F.F.I.N. device.

He also technically left the building the time he got kidnapped. Yeah, when you think about it for more than five minutes, he is not actually all that good at being a ninja. In 2012, after having accrued hundreds upon hundreds of vacation days (and annoyed that no one came to rescue him) the Gardening Ninja decided to take some time off. He resurfaced briefly in 2012 and 2013 for the conventions (and to put in enough hours to get more vacation days), but hasn’t really been seen or heard from all that much since.

He should be running out of PTO pretty soon though.

Y’know, if the only reason Professor X was in the chair was because he was too lazy to stand up.