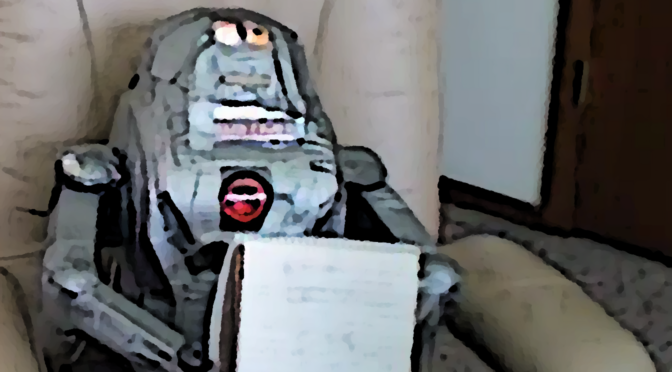 The biggest enemy every faced by the No Brand Heroes is also technically the smallest. The evil Executron has come after our heroes time and time again, usually in an attempt to take over the world, conquer the convention, or just cause havoc in general. He’s also tried to give out advice to people, and for a while actually sat on a convention committee.

In this installment of our continuing series on the NoBrandverse, we hopefully can clear some of that confusion up, talk about the tiny robot’s origins, and talk about his myriad of bizarre henchmen. He really does have some strange ones. 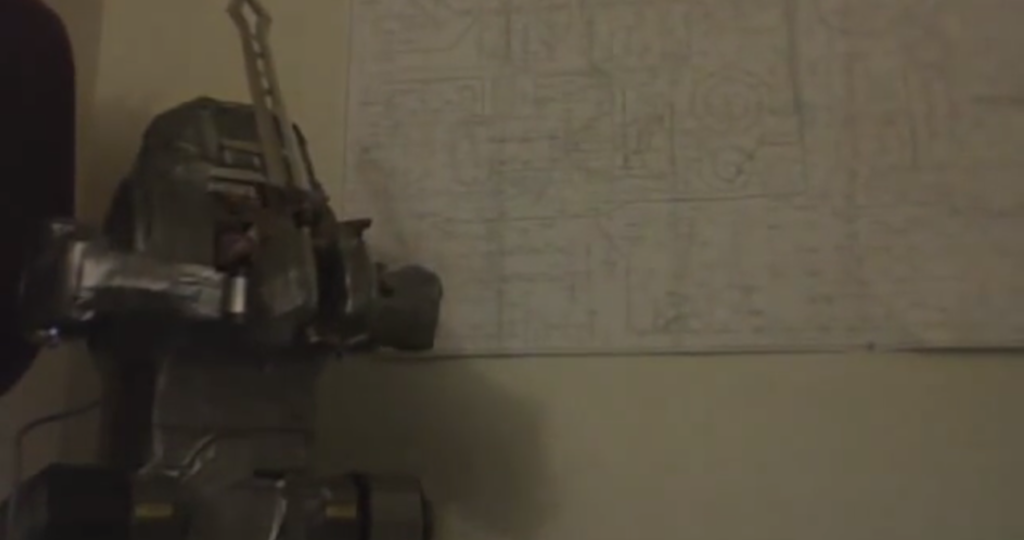 The robot that would go on to rename himself Executron was originally built in 2003 to be the lab assistant to a No Brand Staffer who went by the nickname “Gojira.” Gojira intended the robot (who he called RoboGojira — please don’t sue us Toho) to help the run convention with the staff.

“RoboGojira” wasn’t really on board with being someone else’s servant, and wanted the spotlight for himself.

When Duct Tape Boy went missing on his world tour in December of 2003, and the first Greenboy went off to investigate a mysterious body resembling our hero that was discovered in Bicho, TX. Wanting the world to believe that Duct Tape Boy was dead, “RoboGojira” saw this as his opportunity. Covering himself in duct tape, “RoboGojira” declared himself “Cyborg Duct Tape Boy,” and demanded that he be in charge of the No Brand Heroes.

To continue to push his agenda, the little robot faked a posthumous Western Union Telegram from Duct Tape Boy to the No Brand Con staff with funeral instructions. Notably the telegram instructed the heroes to cremate any body. 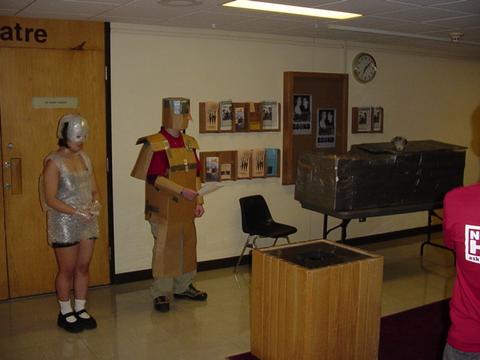 When the body arrived from Texas in April of 2004, RoboGojira confirmed it was Duct Tape Boy and that he was “dead.” A funeral was held, with Cardboard Commando, Bubble Wrap Girl, and RoboGojira in attendance. Greenboy, who had been missing for months (and it turns out had ended up in a Mexican jail) interrupted the event with a giant “Is My Roommate Dead? Stick.” He poked Duct Tape Boy with it, who immediately awoke. Duct Tape Boy had just been in a very long nap. RoboGojira’s plot was revealed to the world, and the tiny robot went on the run.

But not for long. 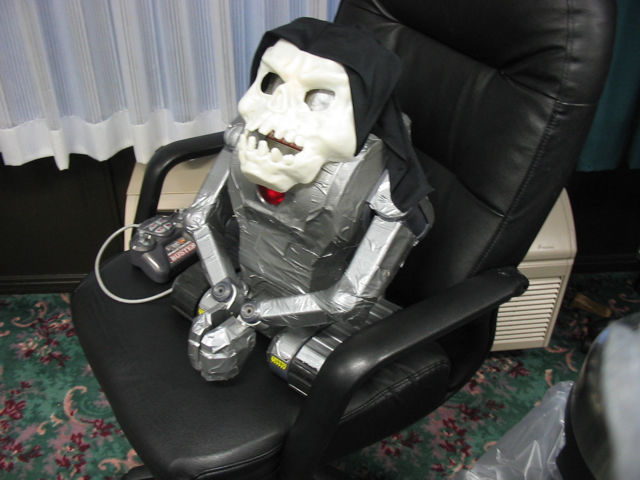 Immediately following the convention, RoboGojira put on a mask and chose a new name for himself — Executron. He recruited businessman Wilson Oakes and the two formed the evil company BrandCorpTM. The only goal of BrandCorpTM was to take over No Brand Con and destroy the No Brand Heroes. We could explain all of the events of 2004-2005 here, but there was a nice little recap cut together a few years later which might fill in some details (though there’s a bit at the end we’ll get to later).

With Wilson Oakes dead and his identity outed, Executron abandoned his mask and decided to lay low for a while. He even joined the No Brand Con “science committee” where he served alongside Science Teacher Lady and “?” for the 2007 convention.
(You May Want to Skip this Video)

Executron’s attempts to be “good” didn’t really last long though, as he also spent this time constructing his “Execuplaza” — which is really just a building.

But it’s an evil building.

Executron also began to recruit new henchmen. The first two he brought into the fold were named “Unlimited Hunger” and “Unquenchable Thirst.” There was supposed to be a theme here, but mostly we think that Executron just doesn’t understand what actually sounds threatening to human beings. 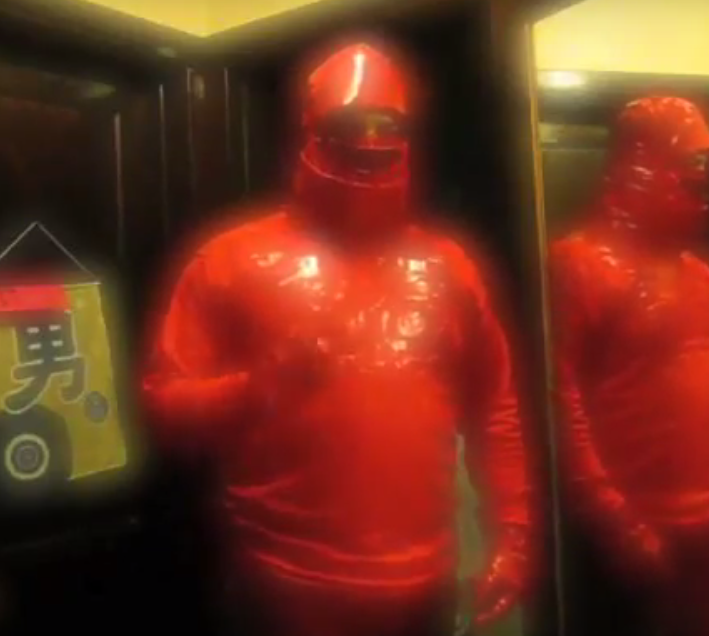 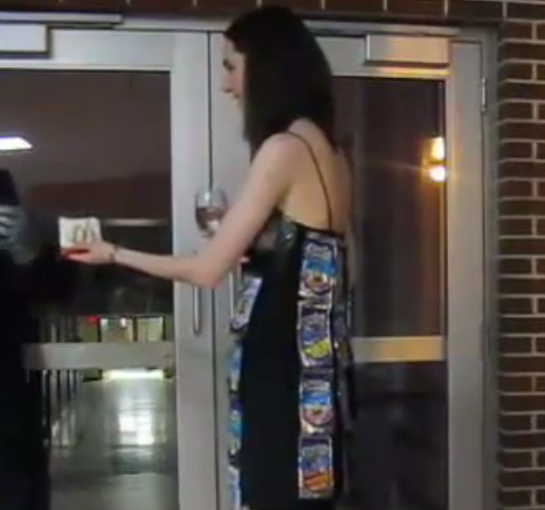 Executron tried out various schemes over the years, but none were all that successful. Well, technically there’s a timeline where he did end the world by activating the Multi Annular Colliding Gravitron Unification Field Fibrillating Inverting Neutralizer (M.A.C.G.U.F.F.I.N.) during the No Brand Con 2010 cosplay contest, but Future Girl came back in time from that apocalyptic timeline (with the help of that timeline’s Gardening Ninja and Duct Tape Boy) and successfully stopped him.

Executron also tried to start up an advice column, considered recording a Christmas album, but eventually, he brought to the world his most useful creation — Wilson Oakes Jr. 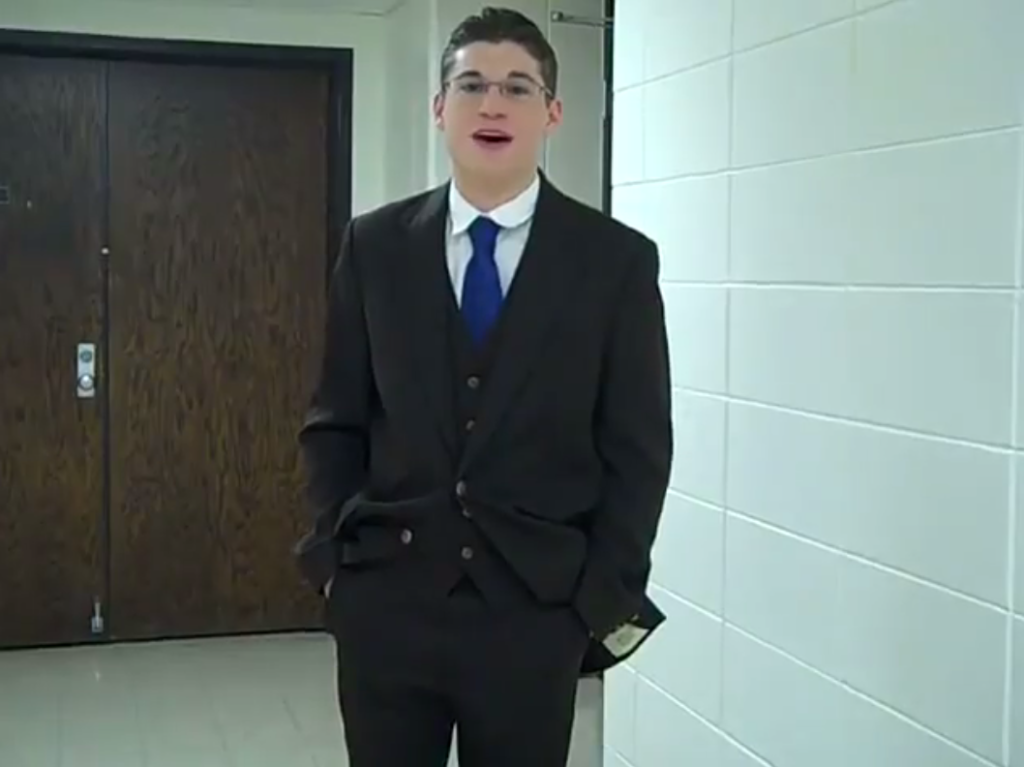 Wilson Oakes Jr. showed up one day claiming to be the son of the late Wilson Oakes (who if you recall from the recap video above was killed by a runaway train in a hotel lobby). Wilson Oakes Jr. was not the son of anyone though, as he was secretly a robot constructed by Executron to help him rebuild BrandCorp. Together, Wilson Oakes Jr. and Executron kidnapped the new Greenboy, experimented on him, did lots of bad stuff — but ended up defeated when Wilson’s identity as a robot was revealed.

Because robots can’t own corporations.

Because corporations are people.

His most recent plot against the convention happened in 2012, when the No Brand Heroes were auditioning new members for the group. Executron put on a disguise and called himself “Friendutron,” making it all the way to the final elimination round.

Thankfully Greenboy, Future Girl and Duct Tape Boy didn’t accept him in. When the Gardening Ninja came back from vacation he immediately pointed out that it was clearly Executron also, doing probably the only useful thing he’s ever done.

Our heroes have repeatedly defeated him, but Executron is still out there… lurking. The tiny robot is waiting to get his revenge, and he could strike at any moment.

So our heroes must always be ready.

Announcing the Return of the No Brand Con AMV Contest! ... See MoreSee Less

Announcing the Return of the No Brand Con AMV Contest!

We briefly stopped running our AMV contest in 2019, but according to you guys, that's the day we went too far. So since you all demanded we bring back the AMV contest for 2020 -- guess what? It's back! Whether your AMVs are shinny or just shiny, we want to see them! Are you an aspiring video effe