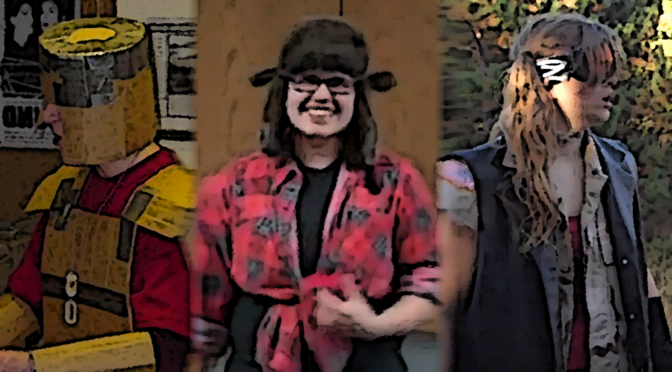 We’ve gone through quite a few members of the No Brand Heroes in this series, but honestly the team has a very deep bench. Doing write ups on every single one of them would take forever. So, to keep this from getting unwieldy, in this article, we’re going to cover the heroes who aren’t Duct Tape Boy, Greenboy, the Gardening Ninja, or Magical Girl Girl.

Some of these heroes have played vital, main roles over the years, while others have only played minor parts. But each and every single one of them is a full fledged member of the No Brand Heroes.

Well, except the couple who aren’t. 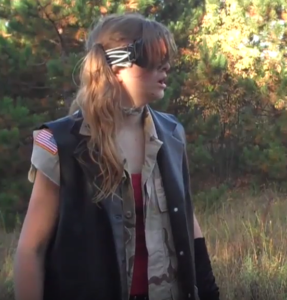 Future Girl comes from the far off “future” year of 2010. She lived the first 20 years of her life in an alternate apocalyptic timeline created by Executron activating his Multi Annular Colliding Gravitron Unification Field Fibrillating Inverting Neutralizer (M.A.C.G.U.F.F.I.N.) during the No Brand Con 2010 cosplay contest.

That timeline only existed for six months, so we’re not sure how she lived 20 years, but we try not to think too hard about it.

Anyway, Future Girl went back in time (with the help of that timeline’s Duct Tape Boy and Gardening Ninja) and stopped Executron. The apocalypse erased, she joined the No Brand Heroes (because where else was she going to go). After stopping the 2010 apocalypse, Future Girl also played a vital part in stopping BrandCorp in 2011 and selecting a new member of the team in 2012. 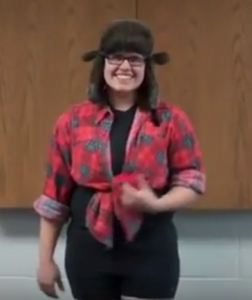 Tagalong joined the No Brand Heroes in 2012, after a long series of trials. Her main superpower is that she’s just super nice to people, and occasionally likes to bake cookies.

Also her fur hat contains the spirit of an ancient wizard, and is the only one who can stop the great elder god X’li’crthilan from opening one of it’s thousand mouths and speaking the word that will turn the Earth’s rivers to fire and consume the flesh from our bones. 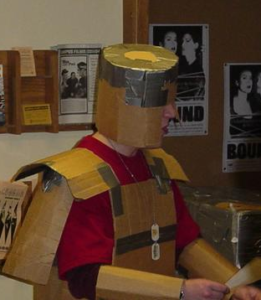 The Cardboard Commando is one of the original members of the No Brand Heroes. He fought alongside (the previous) Greenboy and Duct Tape Boy in some sort of “war” (which has never been specified or explained).

The Cardboard Commando wears armor made from a high tech carbon based material — and by that we mean cardboard. He also has a legendary hatred for Duct Tape Boy, which is why he really hasn’t been seen in recent years. He notably gave the eulogy at Duct Tape Boy’s “funeral” in 2004, and sided with the Gardening Ninja when he faced off against Greenboy in 2007.

No one’s heard from him in a while though, so people have started to get worried. 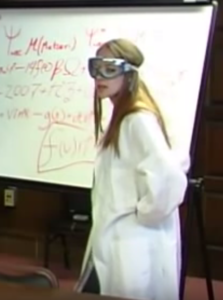 When Duct Tape Boy went kind of weird (or at least moreso than normal) and decided that No Brand Con was actually a “high school” (none of it made sense and we acknowledge that), the first thing he did was hire a “science teacher” in 2006. Science Teacher Lady soon took over the science committee, and planned various projects like running the No Mercy Room off of a small nuclear reactor.

Science Teacher Lady mostly keeps the various devices around the Amazing Justice Center working, and built at least three interstellar Spaceships from spare parts she found in a Castle Food’s parking lot. She also built the “holodisplay” — a holographic monitoring system used to track our heroes in the field.

Since she rarely leaves her lab these days, Science Teacher Lady hasn’t been seen that much – but we’re assured that she’s still down there.

Bubblewrap Girl is one of the original No Brand Heroes (alongside Duct Tape Boy, the old Greenboy, and Cardboard Commando), and was at one point Duct Tape Boy’s girlfriend.

The official story is that, as she was partially composed of bubblewrap, Duct Tape Boy “sent her away” because it was “so dangerous” for her to go into battle. The unofficial story’s more that people got weirded out by the idea of Duct Tape Boy having a love interest, and future “writers” opted to “not bring the character back.”

But hey, she’s a person who exists in this world. 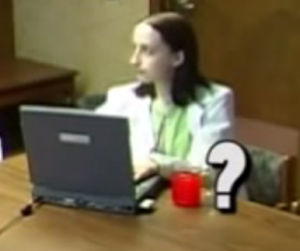 “?” is a member of the No Brand Heroes’ science committee.

That’s it I guess? And yes, her name is really spelled “?.” “?” is pronounced with sound that you make when you’re curious or inquisitive, but not really able to form words or even open your mouth. You should also raise your eyebrows and look up slightly when saying it too.

“?” is also in charge of all pudding purchases made by the No Brand Heroes. 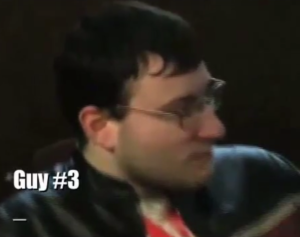 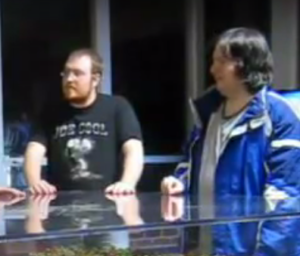 The Guy Squad are just a bunch of guys… sort of. They do maintenance for the No Brand Heroes, keeping the Amazing Justice Center up to snuff and the various team vehicles running.

Here’s the thing though, if you ever ask them what their name is, they’ll just respond “Guy Number [insert number here].” And if more than one of them is in the room, they speak in unison. This is because the “Guys” actually share a hive mind. They aren’t so much “multiple people” as they are “one person in many places at once.”

It’s kind of weird once you think about it.

There are actually a bunch of other superheroes running around the NoBrandVerse besides our heroes. When the No Brand Heroes were recruiting in 2012, they had a bunch show up trying to join the team. Besides Tagalong (and Executron in disguise), Lumber-Jack, Yarn, and Fangirl all tried out for the team.

You can find out everything we know about them by watching the auditon video: